Are mAbs the ultimate targeted therapy?

Since the 1980’s, monoclonal antibodies (mAbs) have revolutionized healthcare and continue to do so. A short history of mAb approvals shows their increasing sophistication and targeting of disease mechanisms – even down to purifying them for medicinal use.

The idea of magic bullets in healthcare has a long and bright history, starting with Paul Ehrlich in the early 1900’s and leading directly to chemotherapy used to treat bacterial and parasitic infections. Although vaccines and antibiotics can be related to the original concept of an accurately targeted therapy, it is the arrival of synthetic antibodies, enabled by the discovery of hybridoma technology in the 1970’s, that keeps the old idea of magic bullets alive today.

The first monoclonal antibody (mAb) approved by the FDA for clinical use (Orthoclone OKT™3, muromonab-CD3, 1985) was designed to avoid rejection during organ transplantation. It was a mouse antibody that experience soon showed could result in unwanted development of human anti-mouse antibodies (HAMA). Since then, nearly all therapeutic mAb’s are chimeric, humanized or completely human in genetic makeup (see the figure below) to try to avoid this obstructive and potentially dangerous immune response. 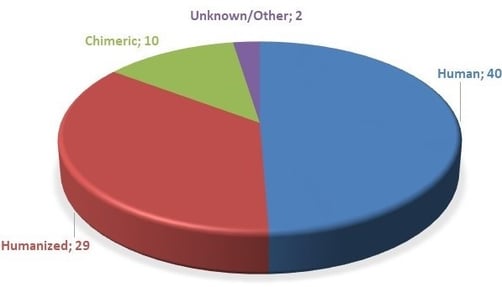 Another class of related molecules is the Fc fusion proteins, of which the most well-known is probably Enbrel™ (etanercept). There are now more than 10 approved Fc fusion proteins, used for a wide variety of applications, from rheumatoid arthritis, to cancer, diabetes and genetic enzyme deficiency.

By the end of 2018, over 60% of approved mAbs were produced in a CHO cell, system- read more about the status of mAb purification from these cells.

Close to the original magic bullet concept, there has been great interest in the possibility of using mAbs as carriers for delivering deadly toxins to targeted cells – antibody-drug conjugates (ADC’s). In reality, only 3 such molecules have been approved (Zevalin™, ibritumomab tiuxetan; Adcetris™, brentuximab vedotin; and Kadcyla™, ado-trastuzumab emtansine - approved in 2002, 2011, and 2013 respectively). Kadcyla is used for HER2-positive metastatic breast cancer and consists of the humanized IgG1, Herceptin™ (trastuzumab), conjugated with a cytotoxin, DM1 (a microtubule inhibitor) [1]. Other mAb variants that have been approved are Fab fragments - smaller molecules that gain access to areas that are restricted for full length IgG’s - and pegylated Fab fragments that avoid unwanted Fc-related reactions whilst maintaining a long half-life.

There has been considerable excitement over the recent introduction of bispecific molecules such as Blincyto™ (blinatumomab, 2014) a 54 kilodalton mouse antibody fragment used to treat acute lymphoblastic leukaemia by bispecific T cell engagement[2], and Hemlibra™ (emicizumab, 2017) a humanized IgG4 used to treat haemophilia A by binding coagulation factors IXa and X[3]. However, an earlier bispecific antibody, approved in Europe for treatment of malignant ascites (Removab™, catumaxomab, 2009), was subsequently withdrawn in 2017[4]. In 2018, all the mAbs approved by the FDA were monospecific full-length IgG molecules[5].

Whatever the ingenuity of future magic bullets, a challenge with their manufacture is the need for purification. Indeed, the more complicated molecules frequently require more purification steps. Antibodies that lack the Fc region cannot be purified by Protein A-based platforms, and conjugates or bispecific molecules might need purification of the various sub-components as well as removal of reagents and unwanted variants of the desired multifunctional product. At Bio-Works our aim is to help you solve these purification challenges in an economic way with state-of-the-art chromatography resins and novel methodological approaches. Don’t hesitate to use us as a resource.

Read more about Three market changes that will impact the production of mAbs.

and mAb purification - an overview of the essentials