Can you generalize about something as broad as protein purification strategy? Surely it depends on the protein and the situation in general? Well, yes, of course. But there are some general aspects which might be valuable to think through before setting up any specific protein purification.

The aim is to find the shortest way from starting material to end product, while still maintaining maximal yield and recovery of biological activity.

So, we can talk generally about planning a purification scheme and key parameters and considerations for protein purification.

The requirement for protein purity varies between applications

Even minor impurities could cause significant problems, in research but particularly in therapeutic applications. Worst case, they could be biologically active. But, to preserve the yield, good enough is good enough - it is important to differentiate between impurities that must be removed completely and those that can be reduced to acceptable levels.

Because different types of starting material will contain different impurities, they will of course present different purification challenges.

The bottom line is:

The quality of the end-product should never be compromised.

The scale of the purification will depend on the amount of target protein required but also on the sample volume and the proportion of contaminants that have to be handled (bound) by the column.

The required amount of purified protein can be obtained by multiple purification cycles at smaller scale, if scale-up is not an option.

It is not always sufficient to obtain a highly pure protein; it often needs to have a high degree of homogeneity as well.

Protein alterations such as aggregation, glycosylation, alkylation or phosphorylation may affect the final product in terms of biological activity and/or structure. You may have to add further purification steps in order to separate proteins with very similar but not identical properties. 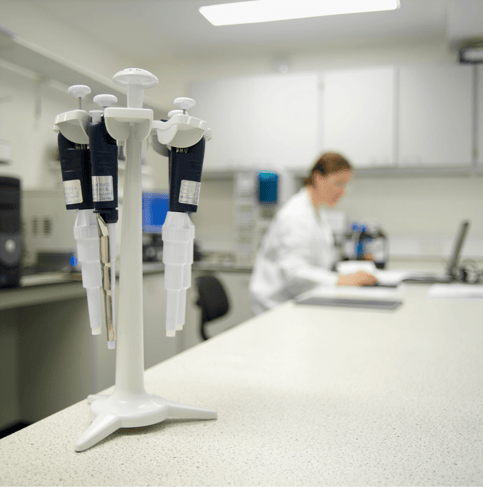 So here are some basic rules for protein purification

Large columns and large amounts of resins and buffers can be expensive. Therefore, it is a good idea to reduce the sample volume quickly at an early stage in the purification process. One of the best ways to achieve this is to use adsorption techniques where the target protein is bound to the resin and can be eluted in a smaller volume (IEX, HIC, affinity chromatography).

Proteases work very fast to degrade proteins, so you need to be faster. Proteases are often present in crude sample feeds and should be eliminated quickly. Introduce a step that reduces protease content at the beginning of a process if this is a problem. You can also work at +4 oC to reduce the activity of the protease or add a protease inhibitor (but remember that everything you add you later have to remove).

Work with highly efficient techniques at early stages in the process to capture the product and reduce the contaminant content. Continue to work with increased selectivity in later steps for optimal separation (polishing). “From big beads to small beads” is a useful mantra.

Avoid conditioning steps by choosing the optimal sequence. For instance, HIC after IEX. 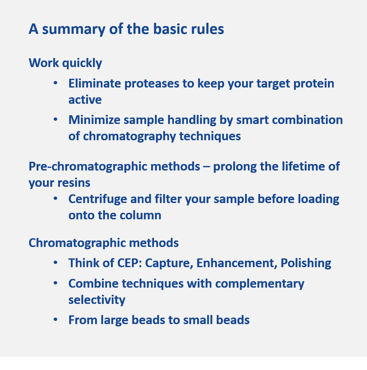 And finally: KEEP IT SIMPLE!