How reversing downstream bioprocess steps can make all the difference

Improving downstream bioprocess economy depends on fine-tuning an enormous range of parameters, from culture and harvesting to purification and final polishing. Success depends on the ability to troubleshoot difficulties and identify novel approaches that will boost process efficiency in a cost-effective manner. This is particularly true when high-value chromatography columns are used in the process. Bioburden and cleaning-in-place procedures can reduce column lifetime and capacity, and threaten product quality and yield. An alternative approach that protects these valuable columns is to reverse the first two steps to remove the potentially damaging components of a feedstock before proceeding with highly selective capture followed by polishing. We call this ECP...

Warning signs that a process is running out of control can include:

Reduced yield of the product and increasing levels of HCPs can be related to each other, especially if the HCPs include proteases that can degrade the product. Increasing backpressure or decreased column efficiency and asymmetry may be a result of the accumulation of biomolecules that foul or degrade columns. Fouling is a cumulative process that may block pores and/or block binding sites on the surface of resin, reducing mass transfer into the resin bead, and can be followed by checking a number of indicators including:

Fouling can be influenced by interactions between deposited materials, and also changes in conditions or steps such as cleaning protocols. To examine these problems in more detail, let us take the purification of antibodies using protein A columns as an example.

A case in point: Protein A column chromatography

Monoclonal antibody (mAb) production is a major part of the biopharmaceutical industry and protein A affinity chromatography is central to the robust manufacture of these products. Protein A columns can be very expensive, comprising up to about 50–80% of total resin costs in some cases, and more advanced and highly selective protein A columns are used in the first step of purifying high titers of IgG feedstock material. Subsequent polishing with anion exchange, cation exchange and/or hydrophobic interaction chromatography removes problematic, co-purifying HCPs and HCD. This widespread approach puts protein A columns in the front line when it comes to exposure to bioburden. To be economically viable, protein A columns must be cycled hundreds of times despite the fact that they are sensitive to Cleaning in Place (CIP) procedures that commonly involve sodium hydroxide and some fouling components may be virtually impossible to remove even with harsh CIP methods. Improving protein A column performance and resin lifetime has therefore become a major focus for downstream process R&D.

Many factors can reduce the performance of protein A column resin, including:

The problem of fouling has been put into clear graphic terms by Lintern and coworkers, who have shown that there is a correlation between appearance of surface deposits (foulants), reduction in resin capacity and the increase in the number of host cell proteins carried over between cycles of agarose-based protein A chromatography (Fig 1; references 2, 3). 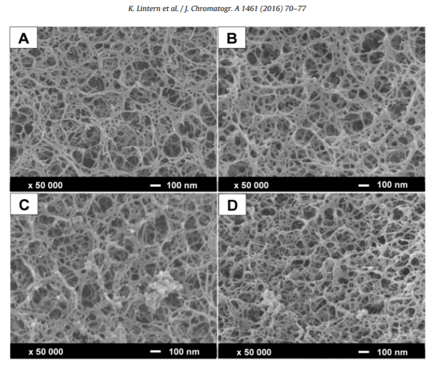 Figure. 1. Fouling of a protein A resin. Scanning electron microscopy images at 50 000 × magnification of the surface of MabSelect SuRe™. A) Unused resin, B) after 50 cycles, C) 60 cycles and D) 100 cycles. Taken from Figure 4, Lintern et al, 2016 [open access article under the CC BY license]

Observations such as these have stimulated the development of methods for the direct, quantitative assessment of fouling that could be of great interest to the biopharmaceutical industry[3].

A number of strategies have become established for downstream purification. As we have seen, one strategy for purifying mAbs involves exposing the most expensive component in the production of a dominant sector of biopharma, the protein A column, to excessive bioburden and rigorous CIP procedures.

The question is, can we protect this key component from damage and yet maintain, and even improve, process efficiency and economy?

There is indeed an approach that enables the early rapid removal of HCP impurities, including proteases, which can foul columns and even degrade the product.

A strategy originally formulated by Bio-Works focused on how and which complimentary separation techniques could be combined, and sample manipulation reduced to a minimum. These three purification process phases (CEP) focus on: (i) concentrating the target substance and removing harmful impurities (Capture), (ii) further removal of bulk impurities (Enhance) and finally, (iii) removal of remaining trace impurities and unwanted structural variants of the target for example aggregates (Polish). Purification should require no more than three chromatographic steps. If there are more, too much target protein will be lost and the ratio of purity to cost becomes unacceptable.

This strategy can now be modified by changing the order of the steps, with significant benefits to both purity and process performance.

An initial, preferably orthogonal, purification step (Enhance) removes a major portion of impurities such as host cell DNA, HCPs and endotoxins. Early removal of these impurities eliminates bioburden on the next step (Capture) involving a valuable resin and should thus extend its lifetime. The process is completed with the Polish step.

We call this the Enhanced Capture Process, or ECP.

The usefulness of this approach has already been demonstrated.

You can find the details for the figure above in our application note. "Protection of Protein A resin during mAb purification.

Another example is the use of cation exchange chromatography upstream of high-value reversed-phase chromatography (RPC) columns to improve yield, purity and process time, and where WorkBeads 40S proved superior to other resins for this purpose.

You can read much more about the applications above in this blog post and this article where you can find links to application notes and white papers etc.